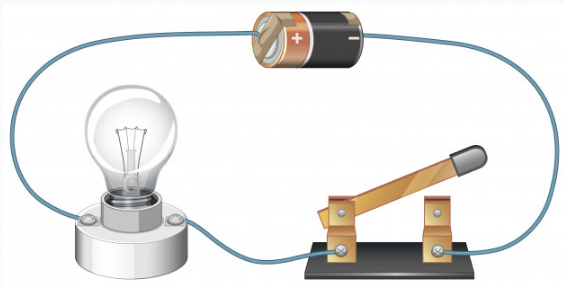 NCERT solution for Class 6 Science Chapter 12 Electricity and Circuits has answers and explanations to fill in the blanks, true or false, circuit diagram and descriptive answering questions, which will guide you in understanding the concepts involved in chapter electricity and circuits.

(a) Electric current can flow through metals.

(b) Instead of metal wires, a jute string can be used to make a circuit.

(c) Electric current can pass through a sheet of thermocol.

3. Explain why the bulb would not glow in the arrangement shown in Fig. 12.13.

The bulb would not glow in the arrangement shown in figure because the one end of the tester/screwdriver is made up of plastic which does not allow the electric current to flow through it.

4. Complete the drawing shown in Fig 12.14 to indicate where the free ends of the two wires should be joined to make the bulb glow.

5. What is the purpose of using an electric switch? Name some electrical gadgets that have switches built into them.

Purpose of an electric switch is to complete or break the circuit. Electrical gadgets that have switches built into them are Fan, refrigerator, television, microwave oven, electric cookers.

6. Would the bulb glow after completing the circuit shown in Fig. 12.14 if instead of safety pin we use an eraser?

No, since eraser is an insulator so it does not allow the current to pass. Hence the bulb will not glow.

As we can see in the figure that two terminals of the cell are connected to a single terminal of bulb which is same as cell and bulb are not connected. Bulb will not glow in this situation.

8. Using the “conduction tester” on an object it was found that the bulb begins to glow. Is that object a conductor or an insulator? Explain.

9. Why should an electrician use rubber gloves while repairing an electric switch at your home? Explain.

10. The handles of the tools like screwdrivers and pliers used by electricians for repair work usually have plastic or rubber covers on them. Can you explain why?