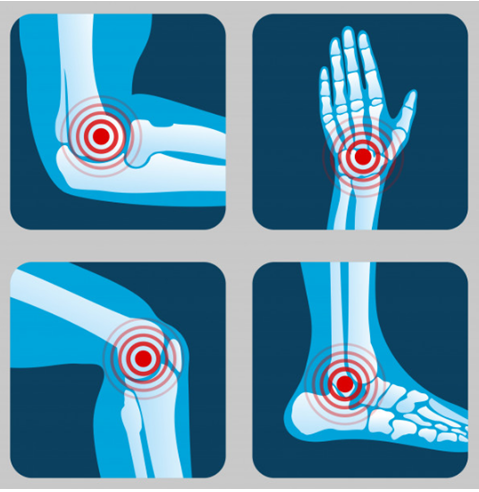 The different topics covered in CBSE Class 6 Science Chapter 8 are tabulated below:

Body movement is something that gets polished as we grow in age. In our childhood, we tend to start with basic movements such as rolling, crawling and eventually walking.

The bones are moved by the alternate contractions and relaxations of two sets of muscles. Muscle is the tissue of the body which primarily functions as a source of power.

There are three types of muscle in the body :

The area where two bones are attached for the purpose of permitting body parts to move.

A joint in which the rounded end of one bone fits into the cavity of the other bones.

Hinge joint is found in the fingers, elbow and knee. It allows movement only in one direction. The knees and elbows have hinge joints.

Some of the joints allow no movement. These are called fixed joints.

E.x :  joints in the skull and upper jaw

The body of an earthworm is made up of many rings joined end to end. An earthworm does not have bones. It has muscles that help to extend and shorten the body. During movement, the earthworm first extends the front part of the body, keeping the rear portion fixed to the ground. Then it fixes the front end and releases the rear end. It then shortens the body and pulls the rear end forward. This makes it move forward by a small distance. Repeating such muscle expansions and contractions, the earthworm can move through soil.

The rounded structure a snail carries on its back is called the shell and it is the outer skeleton of the snail, but is not made of bones. The shell is a single unit and does not help in moving from place to place. It has to be dragged along. The snail can even hide its head inside the shell.

For movement a thick structure and the head of the snail come out of an opening in the shell. The thick structure is its foot, made of strong muscles. The under surface of the muscular foot is lubricated with mucus, which helps in movement and also reduces the risk of injury from sharp objects. Waves of muscular contractions along this surface help a snail move.

Birds fly in the air and walk on the ground. Some birds like ducks and swans also swim in water. The birds can fly because their bodies are well suited for flying. They are hollow and light, and they don’t have a urinary bladder. These features help them to fly easily.

Snakes have a long backbone and many thin muscles. These are connected to each other even though they are far from one another. The muscles also interconnect the backbone, ribs and skin. It is this interconnected muscles that helps them slither.

Snakes move in S-shaped loops and in a zigzag manner. Each loop of the snake gives it a forward push by pressing against the ground. Since its long body makes many loops and each loop gives it this push, the snake moves forward very fast and not in a straight line.

The head and tail of the fish are smaller than the middle portion of the body, and the body tapers at both ends. This body shape is called streamlined. The shape is such that water can flow around it easily and allow the fish to move fast in water.The skeleton of the fish is covered with strong muscles.