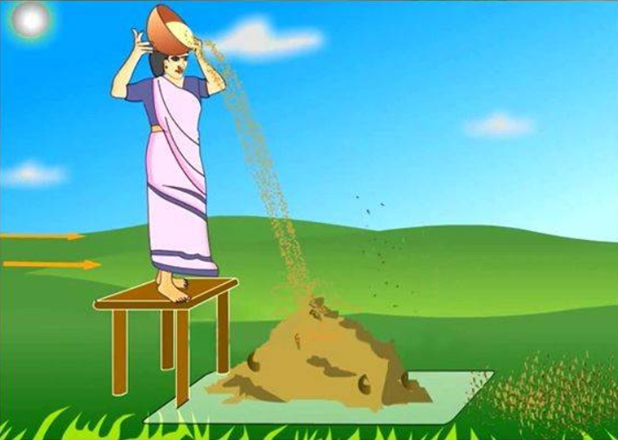 1. Why do we need to separate different components of a mixture? Give two examples.

Among different components of mixture there are many substances which are harmful or not useful for us. To remove these harmful or useful components we need to separate them. For example:

(a) Tea leaves are separated from the liquid with a strainer while preparing tea.

(b) Stone pieces from wheat, rice or pulses are picked out by hand.

2. What is winnowing? Where is it used?

Winnowing is used to separate heavier and lighter components of a mixture by wind or by blowing air. This process is used by farmers to separate lighter husk particles from heavier seeds of grain.

3. How will you separate husk or dirt particles from a given sample of pulses before cooking?

Husk and dirt particles are separated from pulses by hand picking.

4. What is sieving? Where is it used?

Sieving is a method in which fine particles are sieved through holes of the sieve while the bigger impurities remain on the sieve. Sieving is used in flour mills to separate impurities like husk and stones from wheat before grinding it.

5. How will you separate sand and water from their mixture?

Sand and water are separated from their mixture by the following steps:

We will separate sand and water by sedimentation and decantation method.

6. Is it possible to separate sugar mixed with wheat flour? If yes, how will you do it?

Yes, it is possible to separate sugar mixed with wheat flour by the following method :

a) Mix sugar and wheat flour in water

b) Stir the solution to allow sugar to dissolve

7. How would you obtain clear water from a sample of muddy water?

The following process should be carried out to obtain clear water from muddy water :

i) Allow muddy water to stand

ii) Mud gets settled down in the water

(b) When milk, cooled after boiling, is poured onto a piece of cloth the cream (malai) is left behind on it. This process of separating cream from milk is an example of ___________.

(d) Impurities settled at the bottom when muddy water was kept overnight in a bucket. The clear water was then poured off from the top. The process of separation used in this example is called ___________.

(a) A mixture of milk and water can be separated by filtration.

(b) A mixture of powdered salt and sugar can be separated by the process of winnowing.

(c) Separation of sugar from tea can be done with filtration.

(d) Grain and husk can be separated with the process of decantation.

10. Lemonade is prepared by mixing lemon juice and sugar in water. You wish to add ice to cool it. Should you add ice to the lemonade before or after dissolving sugar? In which case would it be possible to dissolve more sugar?

Ice should be added to sugar after dissolving sugar. It is possible to add more sugar before adding ice.When the temperature is high then more sugar can be dissolved. After mixing ice it gets cool and less sugar will dissolve in it.