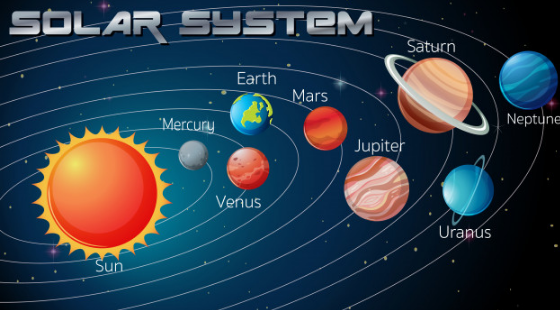 The Earth is the third planet from the Sun and the only place that’s inhabited by living things,The solar system consists of our star, the Sun, and everything bound to it by gravity – the planets Mercury, Venus, Earth, Mars, Jupiter, Saturn, Uranus and Neptune, dwarf planets such as Pluto, dozens of moons and millions of asteroids, comets and meteoroids.The Earth in the Solar System Class 6 Notes Geography Chapter 1

The Earth is the third planet from the Sun and the only place that’s inhabited by living things. It is the fifth-largest planet in the solar system, and it is the only world with liquid water on the surface. Among all the four planets closest to the Sun, the Earth is the biggest planet.

The Stars and the MOON are celestial bodies which are visible only at night in the sky. During daytime, the power of the sun’s light renders them invisible.

The moon appears differently on different nights—like the Full Moon only once a month, on the poornima night whereas on the fifteenth night after that, there is no moon in the sky (amavasya).

The Pole Star is known to retain the same position every night in the sky. It is also called the North Star since it helps in knowing the North direction.

The sun is made of extremely hot gases, and it provides heat and light to the rest of the solar system. It is about 150 million kilometres away from the earth.

All the planets of the solar system are listed below: (in the order of their distance from sun)

Celestial Body: An object in the universe (but not on the earth) is said to be a celestial body. Examples are sun, earth, moon, stars, etc.

Star: A celestial body that is characterized by being very hot and big, and made of gases is a star. A star typically has its own heat and light.

Full Moon Night: A night when the moon is visible from the earth as a full sphere is called the Full Moon night, and it occurs once a month.

New Moon Night: The fifteenth night after the Full Moon night, when the moon is not visible at all in the sky, is called the New Moon night.

Constellation: A group of several stars which can usually be recognized by a definite pattern is called a constellation. An example is Ursa Major.

Planets: A celestial body which revolves around a particular star in an orbit, and gets all its light from that star, is called a planet. Earth is a planet.

Satellites: A celestial body which revolves around a planet in a particular orbit is called a satellite. The moon is a satellite of the Earth.