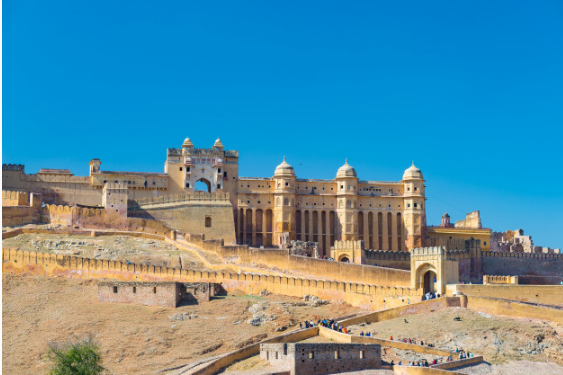 In this chapter, students will learn about the Samudragupta’s prashasti, Genealogies, Harshavardhana and the Harshacharita, The Pallavas, Chalukyas and Pulakeshin’s prashasti kingdom. The chapter also explains how these kingdoms administered, assemblies in the southern kingdoms and ordinary people in the kingdoms.CBSE Notes Class 6 History Chapter 10 New Empires and Kingdom

Mamallapuram is known for its monolithic temples of the Pallavas.

In the early seventh century, Harshavardhan became the ruler of Thanesar. Information about Harsha’s reign is also available in Harsha’s biography Harshacharita, written by Banabhatta. The Chinese pilgrim Xuan Zang spent a lot of time in the court of Harsha.

After the decline of the Satavahanas, there arose smaller kingdoms in the South. Of these, the Chalukyas and the Pallavas were the important ones.

Samudragupta was a famous ruler of the Gupta dynasty. Allahabad pillar inscription is a Prashasti on Samudragupta’s military achievements. The poem was composed in Sanskrit by the Court Poet, Harishena. The poet praised the King as a warrior and equal to God.

The Prashasti described four different kinds of rulers and Samudragupta’s policies towards them. These are :

Prashasti is a Sanskrit word, meaning ‘in praise of’. Prashastis are long inscriptions, written in praise of the kings. From the time of the Guptas, Prashastis became very important.

The Chalukya kingdom was centred at the Raichur Doab. The Raichur Doab is located between the rivers Krishna and Tungabhadra. Their capital was at Vatapi. Pulakeshin II was a famous king of this dynasty. We know about him from a poem composed by his court poet Ravikirti.

Fa Xian was a Chinese pilgrim. He visited India and Sri Lanka. He is the most known for his pilgrimage to Lumbini, the birthplace of Lord Buddha.

A Prashasti is a Sanskrit word which means ‘in praise of. Although composition of prashastis was not a new thing, it became popular only from the time of the Guptas.

In Samudragupta’s prashasti the poet described the king as equal to the gods.

Most prashastis also mention the ancestors of the ruler. For example, there is one prashasti that mentions Samudragupta’s great grandfather, grandfather, father and mother.

Chandragupta, Samudragupta’s father, was the first ruler of the Gupta dynasty who adopted the grand title of maharaj-adhiraj. This title was also used by Samudragupta.

Harshavardhana ruled Thanesar about 1400 years ago. He also began to rule over Kanauj after this brother-in-law was killed.

At the beginning of his rule, he remained successful but finally, his success did not last long.

The Pallavas and Chalukyas were important ruling dynasties in South India.

Pulakeshin II was the famous Chalukya ruler. His court poet Ravikirti composed poems in his praise. It was Pulakeshin II who checked the advance of Harsha.

A new kind of army developed. Kings maintained a well-organised army with elephants, chariots, cavalry and foot-soldiers along with military leaders.

Local assemblies which included the Sabha (an assembly of Brahmin landowners) were there. Ur was a village assembly that existed in areas where the landowners were not Brahmins. Nagaram was an organisation of merchants.

The condition of ordinary people was not good.

Untouchables were not treated well.

It literally means the route leading to the south. The term also referred to the entire southern region.

It referred to an important minister.

It referred to the chief judicial officer.

It was the term used for the chief banker or merchant of the city.

It is a Sanskrit word which means ‘in praise of. The court poets used to praise their rulers in glowing terms.

It was referred to the chief craftsman.

It meant a minister of war and peace.

The term used for the leader of the merchant caravans.

It was a village assembly.