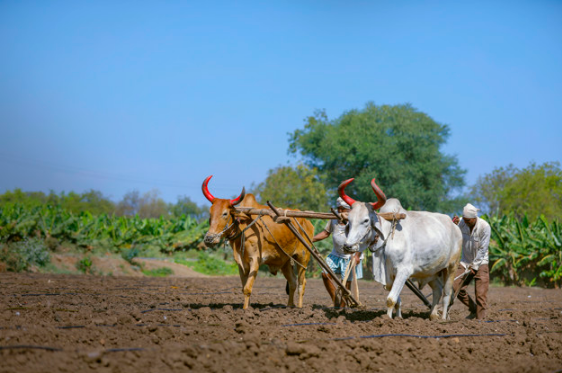 This chapter explains iron tools and agriculture, steps to increase production, lifestyle of the people living in villages. Students will also know the stories, travellers, sculpture and archaeology of cities. By reading this chapter, they will understand that wealth was measured in terms of coins. The chapter ends with a closer look at Arikamedu.CBSE Notes Class 6 History Chapter 8 Vital Villages Thriving Towns

Iron came into use around 3000 years ago. About 2500 years ago, the use of iron tools increased. These included axes for clearing forests and expanding land and iron ploughshare in increasing production.

In the south, large landowners (Vellalar), ploughmen (Ezhava), landless labourers and slaves (kadaisiyar and adimai) were amongst the main community members. In the northern parts, the village headman (grama bhojaka) was hereditary, who was the biggest landowner and used to collect taxes for the King.

Sangam literature was composed 2300 years ago. It was called Sangao because it was written and compiled in Assemblies known as Sangams of Poets which were held in the city of Madurai.

Jatakas were stories composed by ordinary people, but written and preserved by Bud chest monks. Other kinds of evidence to find out about life in some of the early cities are sculptors’ carved scenes depicting people’s lives.

Another way of finding out about early cities is from the accounts of sailors and travellers who visited these cities and kingdoms.

Punch marked coins, which were in use for about 500 years, were called so because the designs were punched on to the metal- silver or copper.

Mathura was important because it was located on the crossroads of two major routes of travel and trade from the North-West to the East and from the North to South. Mathura was also a production centre of fine sculptures.

Extremely fine potteries known as the Northern Black Polished ware were produced. There were famous centres such as Varanasi in the North, and Madurai in the South.

Between 2200 and 1900 years ago, Arikamedu was a coastal settlement where ships unloaded goods from distant lands. A massive brick structure, which may have been a warehouse, was found at the site.

In the Indian subcontinent, use of iron began about 3000 years ago. It developed more and more 2500 years ago. Axes and the iron ploughshare became popular.

New tools and the system of transplantation increased production, and irrigation also came into use.

In the Tamil region, there existed three kinds of people—the large landowners, the ordinary ploughmen and the landless labourers (including slaves).

The Jatakas were stories that were composed presumably by ordinary people and written down and preserved by Buddhist monks.

These tales give light on the life of people in these times.

Ring wells (rows of pots or ceramic rings arranged one on top of the other) have been found in several cities. They were probably used as toilets or drains and garbage dumps.

Accounts of sailors and travellers depict life in early cities. The account of an unknown Greek sailor tells about Bharuch.

Archaeologists have found several coins belonging to this period. Designs were punched onto the metal to prepare them.

Mathura, an important settlement for more than 2500 years. It was located at the crossroads of two important travel and trade routes. It became the capital of the Kushanas about 2000 years ago. It was also a religious centre.

Archaeologists have also found evidence for crafts, like the extremely fine pottery called Northern Black Polished Ware. There were famous cloth centres at Varanasi and Madurai. Craftspersons and merchants formed associations called ‘shrines’, that helped them in their work.

Between 2200 and 1900 years ago, Arikamedu was a coastal settlement.

Rows of pots, or ceramic rings arranged one over the other is known as ring wells.

Ancient Tamil texts that were composed in assemblies called ‘Sangams’ have been referred to as the ‘Sangam’ literature.

An association of craftspersons and merchants was called ‘shreni’. ‘Shrenis’ provided training, raw material, etc. They also served as banks.

These were stories probably composed by ordinary people and then written down and preserved by Buddhist monks.