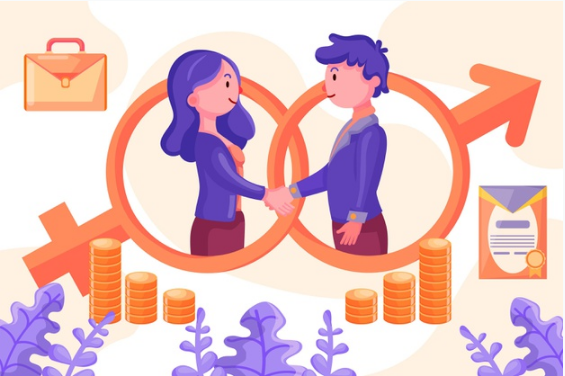 Differences can only be stated on the basis of a comparison or categorization. Whereas, prejudice is an unfavourable opinion or feeling, formed beforehand or without knowledge, thought, or reason.Diversity and Discrimination Class 6 Notes Social Science Civics Chapter 2

In Chapter 2 of CBSE Class 6 Civics, students can explore how such experiences are related to the society they live in. They can also look at how they are connected to the inequalities that exist around them.

Differences can only be stated on the basis of a comparison or categorization. Whereas, prejudice is an unfavourable opinion or feeling, formed beforehand or without knowledge, thought, or reason.

A “stereotype” is a generalisation about a person or group of persons. We resort to prejudice by ascribing characteristics to a person based on a stereotype, without the knowledge of complete facts.

It reduces an individual to a rigid image and does not consider the fact that human beings are complex and multidimensional with unique attributes. Stereotypes suggest that people or groups of people are the same, although they are quite different.

A system of rigid social stratification characterised by hereditary status, endogamy and social barriers sanctioned by customs, law and religion.

It refers to any of the hereditary social classes or subclasses of traditional Hindu society, stratified according to Hindu ritual purity, namely, the Brahmin, Kshatriya, Vaishya and Shudra castes.

The Mahars are an important social group within the Indian state of Maharashtra and its surrounding states. A group of related endogamous castes, the Mahars are the largest Scheduled Caste group in Maharashtra.

The fundamental law, written or unwritten, that establishes the character of a government by defining the basic principles to which society must conform.

How we live, what we speak, what we eat and wear and what we play—all depend upon the historical background and geographical settings of the place we live in.

Each of the eight major world religions is followed in India. There are over 1600 mother tongues and over a hundred dance forms.

Many of us are prejudiced about people that differ from us—like we think our traits, religions, etc. to be the best and we automatically presume that those of others are not good. This is not a healthy trait of our diversity. In prejudice, we often hurt others.

We also tend to create stereotypes—that is, we form one particular image—positive or negative—about something, without pondering over it carefully. The stereotype may be with respect to religion, place of origin or residence, sex, race, background, etc.

When people act in a way that is driven by their prejudices or stereotypes, discrimination happens. In this, we prevent people from using their rights just because we think they are inferior.

Castes were created as a result of discrimination on the basis of occupation of people. Rules were created by the people who called themselves upper caste. The group at the bottom of the caste ladder were labelled as “untouchable”.

The “untouchables” were not allowed to take on work, other than what they were meant to do. People maintained distance from them. They were called ‘Dalits’.

Many Dalits and women came forward to demand equality with other castes and men, respectively. When India became independent, the Constitution was made which laid down laws for equality among all Indians.

Dr Ambedkar, a Dalit himself who had suffered a lot, is considered the father of the Constitution.

The tendency to judge other people negatively or consider them inferior is said to be prejudice.

When one forms a particular image—positive or negative—about something, without thinking over it carefully, this is said to be the stereotype. It may be with respect to one’s religion, place of origin or residence, sex, race, background, etc.

When people act in a way that is due to their prejudice or stereotype, then discrimination takes place: For example, not sharing the same seat with a person of another caste is a form of discrimination.

A document of national importance, that laid out the rules by which the nation would function, is the Constitution: It was prepared after India got independence.

The first page of the Constitution that presents a “summary” of the rules by which that nation must function, is called the Preamble.

The extract is from “Dr. B.R. Ambedkar’s Writings and Speeches” (ed. Vasant Moon). It tells the story of a day when Ambedkar and his companions were discriminated against just because they were untouchables. The sense of discrimination was so much that the station master who met them refused to entertain them once he got to know their caste.

Later, when the bullock- cart drivers came to know this, they refused to carry them and afford to get “polluted” for even double the price. This is the first-hand experience of Ambedkar, who later came up as one of the greatest leaders of India.