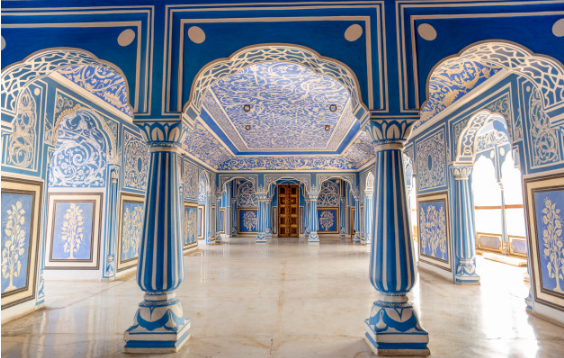 The last chapter deals with the building, painting and the books of the ancient time. In this chapter, students will know about the iron pillar, buildings, brick and stone, stupas and temples, paintings and books. The exercise contains 8 questions and answers to all are provided in the solutions.CBSE Notes Class 6 History Chapter 11 Building Paintings and Books

During this period, epics were composed and compiled. Epics are grand and long compositions about the heroic men, women and God.

During this period, many temples for deities such as Vishnu, Shiva and Durga were built.

The Iron pillar at Mehrauli in Delhi is the best example of the skill of Indian craftspersons. It is 1500 years old. Till today, the iron pillar has not rusted.

Ajanta is a famous place for several caves and monasteries with paintings. Paintings were drawn inside caves in the light of torches. All paintings are 1500 years old and the artists are unknown.

A poet Ilango composed the Silappadikaram, a Tamil epic, around 1800 years ago. The Silappadikaram is about the story of a merchant and his wife, Kannagi. This epic mentions the incident that happened in Madurai.

During this period, Kalidasa contributed a lot to Sanskrit literature. Malavikagnimitra, Abhigyan Shakuntalam, Vikramorvasiya, Raghuvansham and Kumarasambhava were some of the popular works of Kalidasa.

Purana means ‘old’. Many Puranas such as the Mahabharata and Ramayana were written during this period. The Puranas contain stories about Gods and goddesses such as Vishnu, Shiva, Durga, Parvati.

Stupa means ‘mound’. The common features of the stupa are round, tall, big and small. At the centre of a stupa, there is a small box known as a relic casket, which contains bodily remains such as teeth, bone and ashes.

During this period, Aryabhatta, a mathematician and an astronomer, wrote a book of science, “Aryabhatiyam”. He also developed a scientific explanation for eclipses. Zero was invented in India during this period only.

Madurai is one of the cities in Tamil Nadu known for its temples. In this city, Tamil Sangam (Assembly) emerged and contributed for the development of Tamil literature and it was the first Sangam assembly in the sequence of the three Sangams.

It is located at Sanchi in Madhya Pradesh. It dates back to the period of Ashoka and is the best architectural evidence for Buddhist history.

Monolithic Temples are the temples that were carved out of a huge single rock. These temples can be seen in Mahabalipuram near Chennai city in Tamil Nadu.

The famous Iron Pillar at Mehrauli in Delhi is a remarkable example of the skill and art of the Indian crafts people.

The pillar was made about 1500 years ago.

The buildings such as stupas and temples also show the skill of the country’s crafts persons. These buildings were made of brick and stone.

The great stupa at Sanchi, Madhya Pradesh, was built over several centuries.

Amaravati was also a place where a magnificent stupa once existed.

Some finest stone temples were built in towns like Mahabalipuram and Aihole.

Building stupas and temples was an expensive affair. Therefore, only Kings and queens decided to build them. They spent money from their treasury to pay the crafts people who worked to build these splendid buildings.

The paintings of Ajanta are world famous. This is a place where several caves were hollowed out of the hills over centuries. Most of these were monasteries and some of them were decorated with paintings.

Some best-known epics were written during this period. For example—the Silappadikaram and the Manimekalai. These were Tamil epics written by llango and Sattanar respectively.

Writers like Kalidasa wrote in Sanskrit. His best-known poem is the Meghaduta.

The puranas which contained religious stories were also written during this time. These were written in simple Sanskrit verse and were meant to be heard by everybody including women and shudras.

The Mahabharata and Ramayana, famous epics in Sanskrit, had been popular for a long time.

The Mahabharata is about a war fought between the Kauravas and Pandavas, who were cousins.

The Ramayana is about Rama, who was the prince of Kosala but was sent into exile for fourteen years.

The Jatakas were collections of stories which were told by ordinary people.

Books on science were also written during this period. Aryabhatta, a mathematician and astronomer wrote a book in Sanskrit called Aryabhatiyam. He stated that day and night were caused by the rotation of the earth on its axis. He also developed a scientific explanation for eclipses.

It is a grand, long composition about heroic men and women and includes stories about gods.

It was an important part of the temple where the image of the chief deity was placed.

These were stories told by common people.

It was a hall-like structure built in the temple for the people to assemble.

It is an art of laying on colours.

It literally means old. The Puranas contained stories about Hindu gods and goddesses.

It is a word that means a mound.

It is a religious place for the Hindus.

It refers to the tower of a temple.