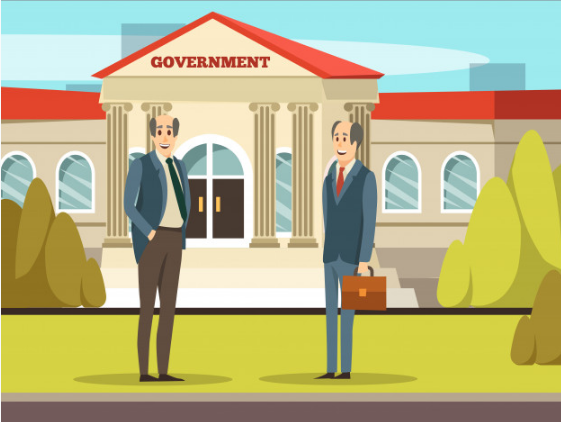 Government is “the organisation, that is the governing authority of a political unit”, “the ruling power in political society” and the apparatus through which a governing body functions and exercises authority”What is Government Class 6 Notes Civics Chapter 3

It is important to know how the country runs and the role that the citizens play in it.

Government is “the organisation, that is the governing authority of a political unit”, “the ruling power in political society” and the apparatus through which a governing body functions and exercises authority”.

India is a representative democracy where people are eligible to vote, elect representatives and participate in the decisions making the process. The government works at different levels: national, state and local level.

It refers to the area of the government which is concerned with national issues such as taxation, defence, international relations and trade.

Each of the State Governments has its own police force, education system and road laws.

A rule of conduct established and enforced by the authority, legislation or custom of a given community, state or nation is called law. It is both the responsibility of the government and citizens to uphold the integrity of laws.

Governments can be classified into several types. Some of the most common types of governments are a democracy, monarchy, etc.

It is a form of government run by elected representatives who hold the decision making power. The word ‘democracy’ originates from the Greek words ‘demos’ and ‘krotos’, meaning “rule of the people.” It can be classified into direct and indirect democracy.

A monarchy refers to the rule by a king or queen. Sometimes, a king is called an “emperor”. It is a government with a hereditary head of the state. It can be classified into two types, i.e., absolute and constitutional monarchy.

The type of democracy in which the citizens delegate authority to their elected representatives.

A Movement started in the early 20th century vigorously for many years, demanding equality with men and the right to vote.

A privilege or right officially granted to a person or a group by a government, especially the constitutional or statutory right to vote.

Each country needs a government to make important decisions and function well. The decisions may be economic, educational or social.

The government also takes care of international boundaries and relations with other countries. It is responsible for the transport facilities and health facilities for citizens.

The government makes laws and every citizen is supposed to follow them. Laws need to be enforced for proper function of the government.

Citizens can also take the help of law if they are dissatisfied with something.

There are some types of government, like the democratic, monarch, etc. In a democracy (like India), the people elect the government themselves by voting in the election. In a monarchy, the king/queen has the power to make decisions and no one from the citizens can* object to them.

The basic idea of democracy is that people rule themselves by taking part in the law-making.

Nowadays, democratic governments are better known as ‘representative democracies’. People do not participate directly. They choose their representatives during elections and these representatives come together for the decision-making process. All adults in the country are eligible to vote according to the universal adult franchise.

There are instances in history when governments did not allow women, the poor people and the uneducated to vote. But when India got independence, the universal adult franchise was enforced.

The system or machinery present in each country in order to make decisions for the proper running of the country is called government.

The rules laid down by the government for the proper functioning of the country are called laws.

A system of government in which the people (citizens) of the country choose their leaders to rule is called democracy. The elected government is answerable to its people for its decisions.

A system of government which is run by a king/queen on a hereditary basis and where people do not get their say in decision-making is called a monarchy. The king/queen is said to be the monarch.

The process in which citizens of a democratic country cast their votes for the leaders of their choice is called the election. The elected leaders form a government later.

The rule that allows all adults in the country, irrespective of caste, creed, gender, literacy, occupation, etc., to vote and take part in the elections, is the universal adult franchise.