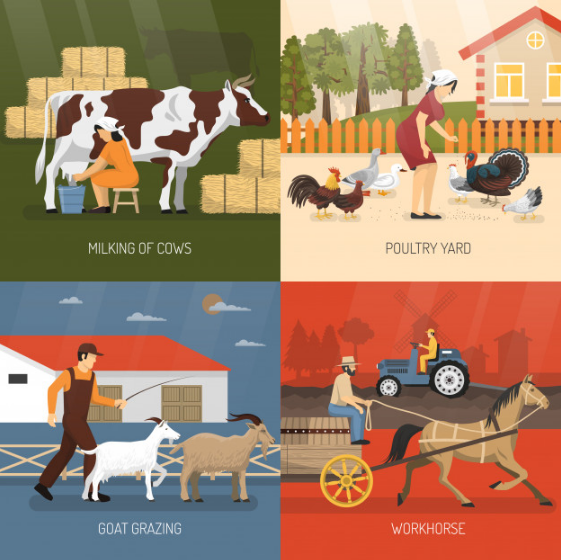 CBSE Syllabus for Class 7 Social Science for the academic year 2020-2021 contains all the important chapters that need to be studied by a Class 7 CBSE student.

Chapter 8: Devotional Paths to the Divine

Chapter 9: The Making of Regional Cultures

Chapter 2: Role of the Government in Health

Chapter 3: How the State Government Works

Chapter 4: Growing up as Boys and Girls

Chapter 7: Markets Around Us

Chapter 8: A Shirt in the Market

Chapter 2: Inside Our Earth

Chapter 8: Human Environment Interactions – The Tropical and the Subtropical Region

Chapter 9: Life in the Deserts

As you have seen meanings of words change over time. Term “Hindustan”, is known as “India,” the modern nation-state today. The term was first used in the 13th century by Minhaj-i-Siraj, a chronicler who wrote in Persian and contains the areas of Punjab, Haryana and the lands between the Ganga and Yamuna. The term was used in a political sense for lands that were a part of the dominions of the Delhi Sultan. Areas included in this term shifted with the extent of the Sultanate, but it never included South India. In the early 16th century, Babur used Hindustan to describe the geography, the fauna and the culture of the inhabitants of the subcontinent, same as how 14th-century poet Amir Khusrau used the word “Hind”. Even if the idea of a geographical and cultural entity like “India” did exist, the term “Hindustan” did not carry the political and national meanings associated with it today.

By the 7th century different regions of the subcontinent had big landlords and warrior chiefs, who were acknowledged as the subordinates or samantas by the existing kings. They had to bring gifts for their kings and overloads and had to be present at their courts and provide military support. However, as these samantas gained power and wealth they declared themselves as maha-samanta, maha-mandaleshvara (the great lord of a “circle” or region) and so on. At times, they even asserted their independence from their overlords.

Under the Tomaras and Chauhans, Delhi became an important commercial centre. Many rich Jaina merchants lived in the city and constructed several temples. Coins called dehliwal were minted here and had a wide circulation. Transformation of Delhi into a capital that controlled vast areas of the subcontinent started with the foundation of the Delhi Sultanate at the beginning of the 13th century. The Delhi Sultans built many cities in the area that we now know as Delhi.

Ruling a large territory as the Indian subcontinent involving such a diversity of people and cultures was an extremely difficult task to accomplish in the Middle Ages. However, in contrast to their predecessors, the Mughals created an empire and accomplished what had before seemed possible for only short periods of time. From the latter half of the 16th century, they expanded their kingdom from Agra and Delhi, going on to control nearly all of the subcontinent in the 17th century. They imposed structures of administration and ideas of governance that outlasted their rule. It left a political legacy, which the succeeding rulers of the subcontinent could not ignore.

The Qutb Minar is five storeys high with a band of inscriptions in Arabic under its first balcony. The first floor was constructed by Qutbuddin Aibak in 1199 and the rest by Iltutmish around 1229. Over the years it was damaged by lightning and earthquakes and repaired by Alauddin Khalji, Muhammad Tughluq, Firuz Shah Tughluq and Ibrahim Lodi.

What would a traveller visiting a medieval town expect to find? It depends on the kind of town it is–a temple town, an administrative centre, a commercial town or a port town. Many towns combined several functions – they were administrative centres, temple towns, as well as centres of commercial activities and craft production. Students can learn more about Towns, Traders and Craftsperson from Chapter 6 of CBSE Class 7 History.

Even as kingdoms rose and fell, new arts, crafts and production activities flourished in towns and villages. Though important political, social and economic developments had taken place over the centuries, still social change was not the same everywhere for the reason that different kinds of societies evolved differently. Understand how, and why, this happened. In large parts of the subcontinent, society was already divided according to the rules of varna, which was prescribed by the Brahmanas and accepted by the rulers of large kingdoms. The difference between the high and low, and between the rich and poor, increased. Under the Delhi Sultans and the Mughals, this hierarchy between social classes grew further. Meanwhile, there were other kinds of societies, as well.

People perform rituals of worship, or sing bhajans, kirtans or qawwalis, or even repeat the name of God in silence, and some of them are moved to tears. Such intense devotion or love of God is the legacy of various kinds of Bhakti and Sufi movements that have evolved since the 8th century.

We usually describe people in terms of the language they speak. For example, we refer to someone speaking Tamil or Oriya language and lives in Tamil Nadu or Orissa as a Tamil or Oriya person. We tend to associate every region with distinctive kinds of food, clothes, poetry, dance, music and painting. There are times that we take these identities for granted and assume that they have existed from time immemorial. But, the frontiers separating the regions evolved over time (is in fact still changing). Regional cultures today are often the product of complex processes of intermixing of local traditions with ideas from other parts of the subcontinent. Some traditions appear specific to some regions, others seem to be similar across regions, and yet others derive from older practices in a particular area, but take a new form in other regions.

CBSE Class 7 Chapter 10 – Eighteenth-Century Political Formation discusses the emergence of new political groups in the subcontinent during the first half of the eighteenth century, when Aurangzeb died, the third battle of Panipat in 1761, etc. For Class 7 students, it is essential to have a thorough knowledge of these concepts.

Equality is a key feature of democracy and influences all aspects of its functioning. In CBSE Notes Class 7 Social Science Civics Chapter 1 – On Equality, you will learn more about equality – what it is, why it is important in a democracy, and whether or not everyone is equal in India.

This chapter introduces you to the concept of dignity. The government’s role in passing laws and instituting policies is also discussed. In the end, the chapter briefly describes an issue of inequality in the United States of America to highlight that this is a global phenomenon and a feature of many democratic countries.

Chapter 2: Role of the Government in Health – Class – 7 Notes

There are both public and private aspects of health provisioning. Healthcare in India is not available to all, though the Constitution supports a view that the right to health is an aspect of our fundamental rights. Through this chapter, you will begin to visualise the ideal or desired role of government, and the meanings behind its structures.

In Chapter 3 of Civics, the work of the government at the state level is described. After going through Class 7 Social Science Civics Chapter 3 – How the State Government Works, you will find the answers to many questions, such as what is the role of a Member of the Legislative Assembly (MLA) and Ministers? How do people express their views or demand action from the government? The chapter also focuses on how the government functions, and discusses ideas of representation, accountability, and public welfare.

Chapter 4: Growing up as Boys and Girls – Class – 7 Notes

Being a boy or a girl is an important part of one’s identity. The society we grow up in teaches us what kind of behaviour is acceptable for girls and boys, what boys and girls can or cannot do. We often grow up thinking that these things are exactly the same everywhere. But do all societies look at boys and girls in the same way?

In this chapter, you understand how some occupations are seen to be more suitable for men than women. In Class 7 Social Science Civics Chapter 5 – Women Change the World you will also know how women struggled for their equality. Getting an education was and still is, one way through which women can create new opportunities. This chapter will briefly trace the different types of efforts made by the women’s movement to challenge discrimination in more recent years.

Media is a word that is often used to refer to the radio, TV, newspapers, Internet and several other forms of communication. Class 7 Social Science Civics Chapter 6 – Understanding Media, will help you to explore more about the media. You will understand why it is necessary for the media to be independent in a democratic country. Also, you will know the way the media affects our daily lives.

Chapter 7 focuses on aspects of life and commercial cycles associated with the market. In this chapter, students will learn about the weekly market, shops in the neighbourhood, shopping complex and malls, chain of markets, markets, and equality.

Chapter 8 of Class 7 Civics describes how markets offer people different opportunities. The ‘story of a shirt’ and the chain of markets involved in the process helps you understand this chapter in-depth. With each step of the manufacture and circulation of a shirt, you will realise that some people make money in the market transaction, whereas others do not gain profit and sometimes are not even paid for their work.

History is full of examples of people who have come together to fight against inequality and for issues of justice. Class 7 Social Science Civics Chapter 9 – Struggles for Equality, you will learn some of the ways in which people have struggled against inequality.

The Indian Constitution recognises all Indians as equal before the law and states that no person can be discriminated against because of their religion, sex, caste or whether they are rich or poor.

Inside our Earth Chapter 2 of Class 7, Geography covers topics such as Interior of the Earth, Rocks and Minerals, Types of Rocks, Types of Minerals, etc. For students, it is essential to know the facts about our planet in which we live.

Air is the generic name for the mixture of gases that makes up the Earth’s atmosphere. This gas is primarily nitrogen, mixed with oxygen, water vapour, argon, carbon dioxide, and trace gases. Air is essential for all living beings for survival. Chapter 4 – Air of CBSE Class 7 Geography elaborately explains the composition of the atmosphere, structure of the atmosphere, weather and climate, etc.

Water is one of the most important substances on earth. All plants and animals must have water to survive. If there was no water there would be no life on earth. Water that is safe for drinking is called potable water. There are various sources from where we can collect water.

Natural vegetation and wildlife are the plants and animals that survive naturally in a specific region and are part of the biosphere. The concepts that students will get to learn from Chapter 6 of CBSE Class 7 Geography are different types of natural vegetation, forests and grasslands.

Geography for Chapter 8 covers all the essential concepts mentioned in the chapter. The tropical region, which lies very close to the equator is referred to as the equatorial region. The place where a river flows into another body of water is called the river’s mouth. Numerous tributaries join the Amazon River to form the Amazon basin. The river basin drains portions of Brazil, parts of Peru, Bolivia, Ecuador, Columbia and a small part of Venezuela.

A desert is a barren area of landscape where little precipitation occurs and, consequently, living conditions are hostile for plant and animal life. It is classified as hot deserts or cold deserts. Extreme temperatures combined with little rainfall make desert life difficult for people, plants, and animals.

CBSE Notes for Class 7 Geography Free Download for All Chapters

CBSE Notes for Class 7 History Free Download for All Chapters

CBSE Notes for Class 7 Civics Free Download for All Chapters