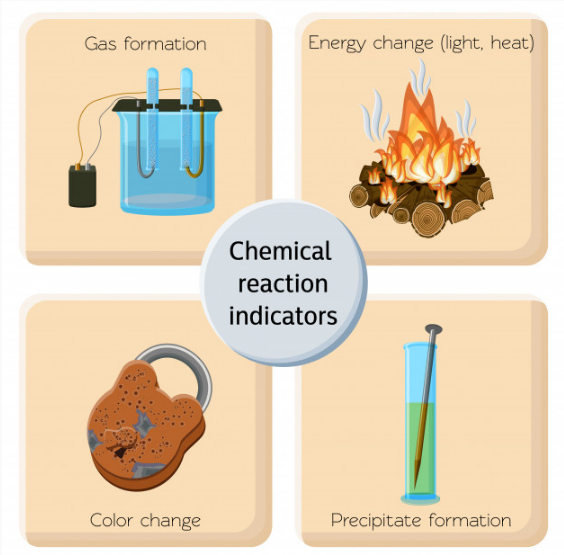 The different topics covered in CBSE Class 7 Science Chapter 6 are tabulated below:

There are several changes we come across daily e.g dissolving sugar in water, or flattening a metal rod by beating it. These involve changes in the form of the substance. Changes can be classified as:

Physical properties include size, shape, colour and state (solid/liquid/gas) of a substance.

Formation of metal oxides are examples of chemical changes. They are formed by the reaction of oxygen in air.

– The product formed is the oxide of magnesium, which is in the form of ash. It does not look anything like the magnesium ribbon used for burning.

Reaction of metallic oxides with water

Reaction between baking soda and vinegar

When a pinch of baking soda is added to vinegar we hear a hissing sound and observe the formation of bubbles.

The carbon dioxide produced during the reaction of Vinegar and baking soda, when passed through lime water gives calcium carbonate, as follows:

Observations that indicate a chemical change

The process of separation of salts from their solution is called crystallisation. It is a purification technique that purifies seawater or separates crystals from impure samples. It is a physical change.